DON’T DIE WITH YOUR MUSIC STILL IN YOU

Home / Blog / DON’T DIE WITH YOUR MUSIC STILL IN YOU 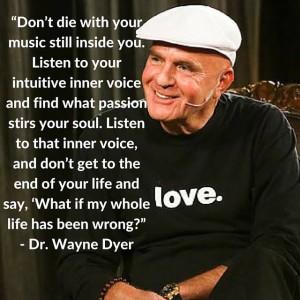 I sit here mourning the passing of a great man. Dr Wayne Dyer touched my heart and soul profoundly and I credit him with where I am today. On the 30th August, the world lost its greatest spiritual teacher, Dr Wayne Dyer. Wayne Dyer genuinely cared about the world and people and wanted to make the world a better place by encouraging us to change our perceptions about others and to practice love. Wayne was a brilliant man, a great thinker and an exceptional human being who impacted on many people and gave them the impetus to make incredible changes in their lives. He was generous in a way so rarely seen and he will be missed by all.

Wayne was my life coach, my mentor, my spiritual teacher and guided me to the path that I am now on. I loved him deeply and will miss him. A number of years ago, I was at a place in my life that was filled with great sadness and turmoil due to some personal losses in my life. I had reached the point where I felt I couldn’t cope with more of the adversity that was coming my way. I had read Erroneous Zones and The Power Of Intention many years ago and knew who Wayne was but had never listened to him speak. I was given some CDs to listen to and I knew I needed to see him. I put a photo of Wayne on my Vision Board. A week later, a close friend mentioned that Wayne was doing a seminar in Melbourne and though that meant the expense of flying and accommodation, I decided to go and see him. In going online to book the ticket, I discovered that Wayne would be facilitating a 15 day seminar out of Australia and though that seminar was only in 10 days time and was completely booked out, I knew that I was meant to be there. When I contacted the organisers in the States, they patiently and kindly told me there was no way I could attend as there was a waiting list of almost 600 people and that it would be unlikely for there to be a cancellation, let alone almost 600, as any cancellations meant that the person/s would lose the entire cost of the trip which was over $5000.

I didn’t allow that to be an obstacle and told the organizers in the States, that if they were responsible for organizing an event for Wayne Dyer, that they would know he spoke about the power of manifestation and that I intended to be at the seminar. I emailed them and called them every day only to receive the same response. Did I let this deter me? NO!!!!!!!

Again, each day I patiently told the organizer that I would be there and to please send me through the payment details so that I could book as soon as there was a cancellation. Three days before the seminar was to start, I received an email saying that there was a cancellation and would I like to attend. Heaven answered and of course I said yes. I knew I didn’t have the money to pay but trusted in the universe to work it out as I knew with every fibre of my being that I had to be there. I put the airfares, accommodation, etc on my credit card and as a result, the course of my history was changed forever.

My roommate was a delightful lady called Jenny Kennedy who I instantly connected with and she has become my best friend. Jenny does some incredible work as an intuitive healer and you can work with her via phone or skype. Go to her website and check her out: http://www.healingjourney.co.nz 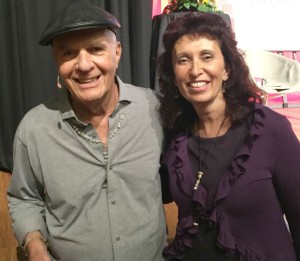 Over the next 15 days, I soaked up every word that Wayne said. I was fortunate in that I got to spend time with him when he reached out to me one day whilst I was going for a walk and he happened to be walking past. He intuitively knew what was troubling me and asked me very specific questions about some of the things that were weighing me down. It blew me away that he had such insight into specific details about my situation. He gave me a healing and the most beautiful hug I have ever received. This hug was full of love and I knew from that moment on, that my life would change. Later on that day, I did a meditation in the ocean and I asked God for a sign that He had heard me, and as I opened my eyes, a blue butterfly flew over me. Butterflies don’t fly out that far out in the ocean! Butterflies are also significant to me as they have manifested to me before when I have needed guidance. Not only are butterflies significant to me, but BLUE butterflies hold a special significance.

There were other miracles that happened to me over that 15 days. One of those stores is shared by Dr Wayne Dyer and his daughter Serena Dyer in their joint book Don’t Die With Your Music Still In You

When I got back to Australia, my life began to change in ways that had previously seemed impossible. I embarked on so many big changes in my life. I started initially with contacting John Of God and doing another healing with him and from there I then went and designed a very strict detox to see if I could heal my body. All of this was done intuitively. I did the detox for 28 days and started to feel significantly better. I returned to eating more food but abstained from eating the foods that the detox had shown were toxic to my body. My arthritis, fibromyalgia and asthma disappeared. This amazing physical healing through food inspired me to undertake study into the power to use food as medicine. I never intended for it to become a career, rather I just wanted to know more. As I learned more, I was able to successfully reverse my osteoporosis. People started to compliment me and asked me what I was doing as I looked so healthy. They then began to ask for help and My Kitchen Heals was born.

My life changed from one of tremendous emotional and physical pain and suffering through following the teachings of Dr Wayne Dyer as well as the healing he gave me during that time with him. I love this man deeply. That’s right, love as in the present tense. He has left his body but his spirit is infinite and his work and teachings will continue to have a lasting legacy. Wayne, you are my mentor and your passing does not change that. Anyone who knows me, knows that I live my life according to the teachings of Wayne Dyer. His passing is a loss of monumental proportions and his contributions to my life are enormous. My heart goes out to his eight children and loved ones. As Wayne said, you don’t need to be better than anyone else, just better than you used to be and because of Wayne, I am and will continue to be.

So go forward into your life and live your passion. Don’t die with your music still in you.